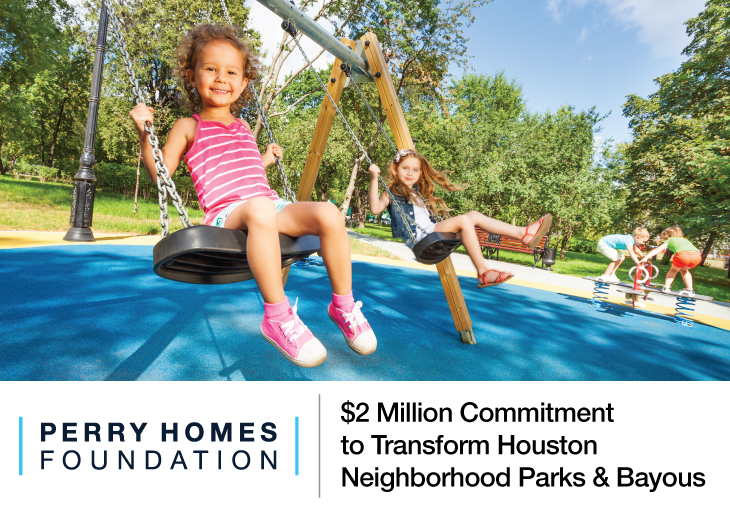 The Perry Homes Foundation has pledged $2 million to the City of Houston to benefit multi-year initiatives that will provide improvements to neighborhood parks and transform underutilized land along Houston’s major waterways into linear parks.

This new $2 million commitment to the Houston Parks Board, combined with $2 million in donations to other charitable organizations over the last four years, brings the total funds committed by Perry Homes and the Perry Homes Foundation to just over $4 million, directly benefiting communities and families across Texas. The Perry Homes Foundation has also named the Houston Parks Board as a new “champion” or cornerstone charity to further signify the impact the two organizations will bring to the City of Houston.

“The Perry Homes Foundation was established with the sole purpose of supporting our neighbors and communities in need, and we are honored to give back to the communities who have been so good to us over the past 53 years,” said Kathy Britton, Perry Homes CEO. “We are passionate about making a difference in our parks and neighborhoods, and we couldn’t be happier to support the Houston Parks Board through its 50/50 Park Partners program to enrich the underserved areas of Houston.”

As part of the 50/50 Park Partners initiative, Perry Homes and the Perry Homes Foundation have committed to align their volunteer and engagement efforts with Dow Park, located just minutes from the Perry Homes corporate office and near several communities in which the company builds new, single-family homes.

Headed by the Office of the Mayor, Houston Parks and Recreation Department, Greater Houston Partnership and Houston Parks Board, the 50/50 Park Partners initiative brings together a city-wide coalition of business partners to provide ideas, monetary contributions, in-kind support and volunteers to improve neighborhood parks. Planned improvements will span over multiple years and will include a variety of park improvements. Project funds will be invested based on priorities of need and distributed citywide across the identified neighborhood parks operated by the Houston Parks and Recreation Department.

“Houston must have thriving parks to support thriving neighborhoods. By improving our communities, we can enhance the overall quality of life for every resident of Houston – one park at a time,” said Mayor Sylvester Turner. “We encourage the great leaders within our amazing city to join us in these efforts, which will allow for an even bigger impact on the areas of Houston that need the most support.”

Through its sponsorship of the Bayou Greenways 2020 initiatives, the Perry Homes Foundation has also committed to beautification efforts near Sims Bayou. The Foundation’s support will be recognized at the bayou bridge connecting Sims Bayou to the Houston Botanic Gardens. Once completed, Bayou Greenways 2020 will feature a 150-mile system of linear parks and trails, connecting Houstonians to more than 3,000 acres of bayous and green space. This initiative will also promote economic development throughout Houston.

The Perry Homes Foundation was established in 2017 by Perry Homes CEO Kathy Perry Britton, in honor of her late father Bob Perry. The Foundation’s core mission is to support initiatives to benefit those who are less fortunate, to create opportunities for students needing financial assistance, and to enhance the beauty of our local parks and communities. For more information, please visit www.perryhomesfoundation.com