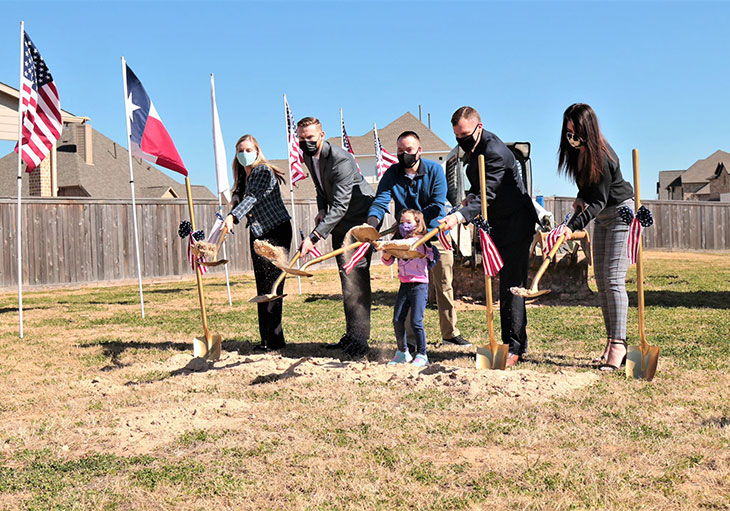 HOUSTON, March 16, 2021 – U.S. Army Staff Sergeant Stephen Netzley and his daughter recently joined their builder partners from Operation FINALLY HOME, Perry Homes, The Howard Hughes Corporation, Greater Houston Builders Association, and the Houston Texans for a groundbreaking ceremony on their new personalized, mortgage-free home at the homesite in the Bridgeland community. A video of the groundbreaking ceremony can be seen here.

The family was escorted to the homesite by the local Patriot Riders and were greeted by representatives from the Houston Texans cheerleaders, TORO, and Texans Legend Chester Pitts.

“What a wonderful day to be able to break ground on this mortgage-free Perry home for Stephen and his daughter,” said Lee Kirgan, Vice-President/Project Management, Operation FINALLY HOME. “After a rough week in Houston with frigid weather conditions, this is a bright spot to gather and honor this American hero by providing him and his daughter a safe place to call home in the wonderful Bridgeland community.”

The handicap-accessible 2,251 sq. ft. home being built for the Netzley family will include open-concept living, three bedrooms, two bathrooms, a private home office, an extended covered backyard patio and a three-car garage. Some construction modifications will include an adapted primary bathroom shower, custom kitchen cabinetry, wider hallways and other safety features designed for Sgt. Netzley. The specialized Perry home is expected to be completed in May.

“We’re very proud to build this home that is perfectly suited for Sgt. Netzley’s family,” said Matthew Gerdes, Perry Homes Houston City President. “The three bedrooms allow for plenty of space for Stephen and his daughter, and this home also features the secluded office that was very important to him. The three-car garage provides Stephen with additional space for storage or hobbies, as well.”

Netzley and his daughter were surprised in November 2020 with the news they were receiving the new home. Additional celebratory events will be planned for the Netzley family in the coming months. The “Notes of Love” event will be held after the framing stage of the home is reached, allowing the builder, sponsors, and the local community to write personal messages to the family on the studs of the home. The “Dedication” event will be held after the new home is complete and ready for move-in.

U.S. Army Staff Sergeant Stephen Netzley was encouraged by his two older brothers to join the military in 2005 with hopes of a brighter future.

Money was always tight for Netzley growing up and he made a lot of personal sacrifices at an early age to help his family make ends meet, including dropping out of high school at 15 years old. Netzley had never owned his own bed before, so with the promise of guaranteed shelter and three meals a day, he enlisted in the U.S. Army as Cavalry Scout and began basic training at Fort Knox.

In May 2007, Netzley experienced what he calls “the most traumatic day” of his life. While overseas in Afghanistan on a mission to escort Afghan soldiers, Netzley’s unit was ambushed along the route. They lost approximately 18 Afghan soldiers, and several American soldiers were severely wounded. The convoy was immobilized, and their manpower was decimated.

The events of that day still haunt Netzley and the memory of preparing the bodies of the lost soldiers to be received contributes to his post-traumatic stress disorder (PTSD).

By 2009, Netzley’s service-related injures included lower back pain that quickly escalated. As a result of operations involving dismounting mountains and being tossed around in trucks due to rough terrain and explosions, the discs in Netzley’s back progressively got worse, and he battled perpetual, radiating pain in both of his legs. Because of his physical limitations, Netzley was assigned to the Wounded Warrior unit where he helped advocate for other single soldiers. He took on an active role in the community and hosted numerous morale-building events for local veterans.

For his bravery and service in the U.S. Armed Forces, Netzley was awarded an Army’s Outstanding Volunteer Service Medal, Army Commendation Medal, Combat Action Badge and a Global War on Terrorism (GWOT) Service Medal, among other accolades.

Netzley and his daughter recently moved back to Texas to be closer to his family. Netzley is currently enrolled in college and plans to get a degree in social work and work with veterans.

About The Howard Hughes Corporation®

The Howard Hughes Corporation owns, manages, and develops commercial, residential, and mixed-use real estate throughout the U.S. Its award-winning assets include the country's preeminent portfolio of master planned cities and communities, as well as operating properties and development opportunities including: the Seaport District in New York; Columbia, Maryland; The Woodlands®, The Woodlands Hills®, and Bridgeland® in the Greater Houston, Texas area; Summerlin®, Las Vegas; and Ward Village® in Honolulu, Hawai’i. The Howard Hughes Corporation's portfolio is strategically positioned to meet and accelerate development based on market demand, resulting in one of the strongest real estate platforms in the country. Dedicated to innovative placemaking, the company is recognized for its ongoing commitment to design excellence and to the cultural life of its communities. The Howard Hughes Corporation is traded on the New York Stock Exchange as HHC. For additional information visit www.howardhughes.com.

Bridgeland is an 11,400-acre master planned community located in Cypress, TX, and is ranked as the top-selling master planned community in Texas and number 10 in the nation. The award-winning development opened in 2006 and offers a wide variety of housing options and extensive outdoor amenities, with a strong emphasis on conserving and enhancing the natural environment. Bridgeland has over 3,000 acres dedicated to lakes, trails and parks, and offers resort-style pools, disc-golf course, stocked lakes and complimentary use of kayaks, paddle boats and other recreational equipment for residents. Lakeland Village Center® is the first of four retail centers in Bridgeland, with additional plans for Bridgeland Central, a 900-acre future town center, along Grand Parkway, which intersects the community. Bridgeland is a development of The Howard Hughes Corporation®.

About the Houston Texans

The Houston Texans were inducted the NFL’s 32nd franchise on Oct. 6, 1999, thanks to a citywide effort spearheaded by franchise founder and late owner Robert C. McNair and current Co-Founder and Senior Chair Janice McNair. The Texans have since evolved into Forbes Magazine’s 19th-most valuable professional sports franchise in the world with an estimated value of $2.8 billion and are annually among the Houston Chronicle’s Top 100 places to work in the city. The Houston Texans are the only expansion team to have won its first game, defeating Dallas 19-10 on Sept. 8, 2002, and have sold out every preseason, regular season and postseason game in franchise history, donated more than $35 million back to the community through the Houston Texans Foundation and won AFC South division titles in 2011, 2012, 2015 and 2016. NRG Stadium, the NFL’s first retractable-roof stadium, is the home of the Texans.

The Greater Houston Builders Association (GHBA), chartered in 1941, is a trade organization whose members are involved in the development, homebuilding and remodeling industries in 11 counties in the Houston area. The association currently has over 1700-member companies, is the 4th largest builders association in the country and the largest in Texas. GHBA is the voice of Houston’s residential construction industry, serving their members and the community through education and advocating professionalism and quality housing. The association also interacts with the government, community and general public to enhance the business climate for its members and to provide quality obtainable housing to the community it serves. The association is also active in community outreach and charitable events.

Based in New Braunfels, TX, Operation FINALLY HOME was established in 2005 as a nonpartisan/nonprofit 501(c)(3) organization with a mission to provide homes and home modifications to America’s military heroes, first responders and widows of the fallen. In 2020, Operation FINALLY HOME is celebrating 15 years honoring heroes with homes, and recently launched its 200th project. Operation FINALLY HOME partners with corporate sponsors, builder associations, builders, remodelers, developers, individual contributors and volunteers to help these heroes and their families by addressing one of their most pressing needs – a place to call home. For more information about Operation FINALLY HOME, visit OperationFINALLYHOME.org, follow @OpFINALLYHOME on Twitter and find us on Facebook.